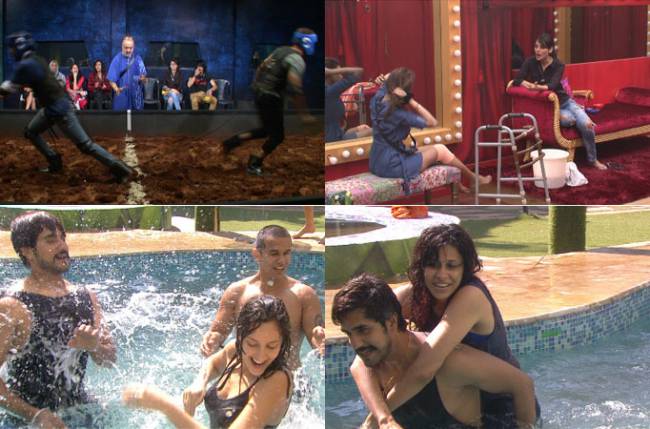 The housemates wake up to the song ‘Mukabala’ which directly hints towards the growing competition inside the house. The morning starts with everyone sitting together in the garden area and discussing about Priya’s captaincy. Mandana accuses Priya for being partial towards a few housemates whereas Priya retaliates in anger to defend herself and the conversation turns into an argument. Prince, Nora, Keith, Rochelle, Suyyash and Kishwer decide to take a dip in the pool and have some fun. The girls piggyback on the boys while they take rounds of the pool. On seeing this, Mandana taunts Prince by congratulating him for his new ‘girlfriend’ hinting at Nora. Later, Kishwer instigates Nora about Mandana’s behaviour when Nora tells Kishwer that if things get out of control, she will show her ugly side to Mandana and teach her a lesson.

Later during the day Nora bursts into tears while thinking about Mandana’s comments when Giselle notices this and calls her fake. Prince gets furious after seeing Nora’s in tears and blasts out at Mandana for troubling Nora doubting their friendship . Mandana apologises to Prince after which they hug and make up. While Prince calms down, Nora flares up on Giselle for calling her fake. Mandana has a chat with Nora about clarifying things to avoid any misunderstanding. But upon realising that Nora is still upset, Prince tells her that he will always stand by her side. He also tells her that he is ready to risk his elimination in order to save her.

In the evening, Bigg Boss announces the captaincy task when the housemates vote for Suyyash and Keith as the contenders for captaincy. The boys have to walk over a pit of mud and reach out to opposite side to press the buzzer while they are tied to each other. The one who  completes the  first is declared as the captain of the house. After this, Suyyash talks to Mandana about Giselle spreading rumours about her personal life including her divorce and boyfriends. Mandana gets upset and confronts Giselle. But Giselle on the other hand defends her actions by saying that she only spoke the truth about Mandana’s behaviour and her divorce only because Kishwer asked her about it.

At night, the housemates are presented by a policy bazaar task in which the housemates select Keith and Rishabh as the contenders of the task. The boys have to point out qualities of the contestants like one sells policies to the members of the house. The winner of this task then has to walk on a stretch of hot coal in order to win the prize amount for his team.

The feeling of becoming a mother is surreal for Alia, says Sukirti Kandpal

Enmity on screen; sisterhood off screen for Shrashti and Jigyasa

‘THIS’ is what Anita Hassanandani does when she is BORED!