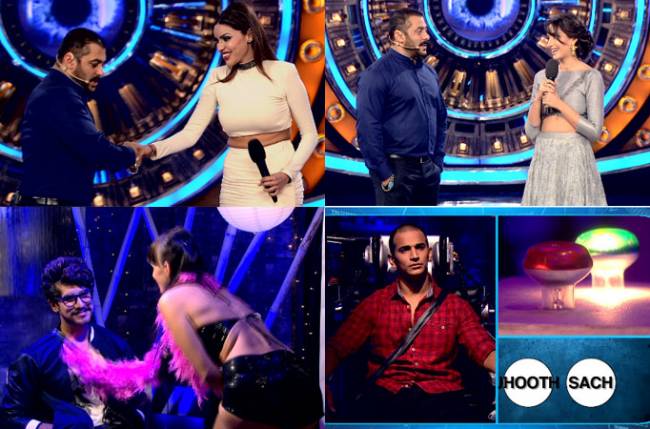 Salman Khan announces the biggest twist this weekend as for the first time ever in Bigg Boss, the housemates will be given the power to eliminate one contestant out of the nominated contestants- Suyyash and Digangana. Beginning the episode on this shocking note, Salman teases Prince by saying that he’ll be left alone if his ‘brother’ Suyyash gets evicted today. Kishwer interrupts and expresses her thoughts on Suyyash and how she will be affected if he gets eliminated. Salman further tells Kishwer that she is a very strong contestant and can survive on her own without Suyyash being around. He also says that he cannot say the same about Prince because without Suyyash, Prince appears to be handicapped.

Soon after, the contestants are subjected to yet another lie detector test. The unexpected revelations during the test take everyone by surprise and unmask their true feelings. Keith discloses the fact that Rochelle has become over confident which might not work in her favour. Kawaljeet says that going by Rochelle’s personality he feels that she did not deserve the ‘Miss India’ title. Additionally, Prince admits that Suyyash is not coming across as a strong player. Later in the day, the handsome hunks Keith and Suyyash are subjected to the lust test. Initially Rochelle and Kishwer are apprehensive about their boyfriends’ reactions but as the task progresses they burst into laughter like the rest of the house.

Furthermore, Salman Khan introduces the two new wildcard contestants, the pretty ladies Norah Fatehi and Giselle Thakral. Their entry will come as a shocker for the housemates as it will add some spice and tadka to the current drama going on inside the house. Lastly, Salman asks the contestants to go through the new eviction process and decide the fate of the nominated contestants. Who will the housemates save from evictions this week- Suyyash or Digangana? Watch Salman Khan reveal all the exciting things in store today!

Media should give some space to celebrities: Arshi Khan

Abhishek Kapur: I haven’t found my kind of girl yet!

Prashant Bhatt’s next on Star Plus; Meher Vij to play the lead?