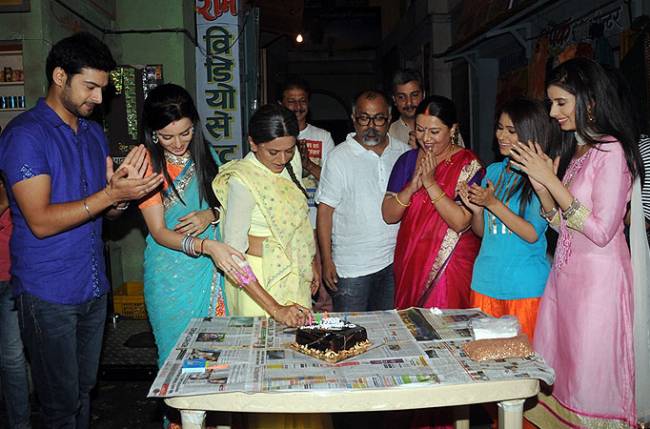 The cast and crew of Star Plus’ Mere Angne Mein (Sphereorigins) recently celebrated the successful completion of their 100 episodes. The show which garnered a lot of eyeballs for its multi starrer talented cast did a cake cutting on sets itself.

When asked why they did not throw a party the leading lady of the show, Ekta Kaul playing the character of Riya Mathur said, “Since last week our show has become 7 days a week with an hour of on air content daily. To deliver the same, the team has been shooting all days a week and we are putting in a lot of effort to give our best to the audience. So our director and the entire team of Mere Angne Mein decided to do a small cake cutting on the sets itself and not throw a party as we had to immediately resume our shoot after gulping the delicious cake”.

The senior most actor from the show, Krutika Desai who plays the central character of Shanti Devi was delighted with the show’s response. The actor expressed her joy on completion of 100 episodes, “To deliver content of one hour all 7 days a week is a tough job and we all as a family unite to achieve the same. I am glad the way the show is shaping us and the response from our viewers only helps us in maintaining our deliveries. I wish many more hundred episodes to reach for Mere Angne Mein”.