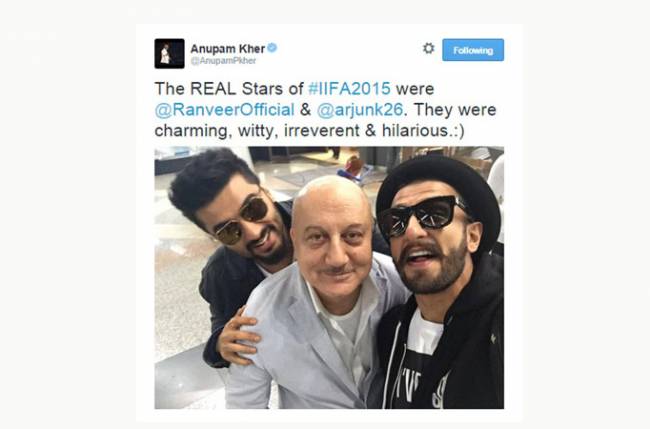 Ranveer Singh and Arjun Kapoor have rocked IIFA 2015 with their absolutely entertaining, irreverent and whacky hosting style. While cracking jokes is common fare at award shows, they proved that hosting works best when the hosts crack the biggest jokes on themselves!

The film fraternity applauded their sense of humor all throughout the awards night, cracking up ever so often at their jokes. Hrithik Roshan, Shahid Kapoor & quite a few stars complimented them on stage. A special toast to their hosting came from Ritesh Deshmukh, who also spoke for Boman Irani. Having hosted IIFA many times over in the past, Ritesh & Boman’s praise showed how much the audiences loved their spoofs & wise cracks.

Ranveer & Arjun’s ability to joke around all things revered in Bollywood endeared them to audiences. Be it the jokes on actresses air kissing on the red carpet, and getting everyone to shake a leg on stage, including Subhash Ghai, Anil Kapoor & Jackie Shroff, the boys brought Bollywood down to earth. And their spoofs on the classic DDLJ were simply rib cracking!

Clearly, they have also won quite a few fans within the film industry. Take a look at the tweets praising the Gunday duo!

Check out what type of life partner THIS Naagin actress wants!