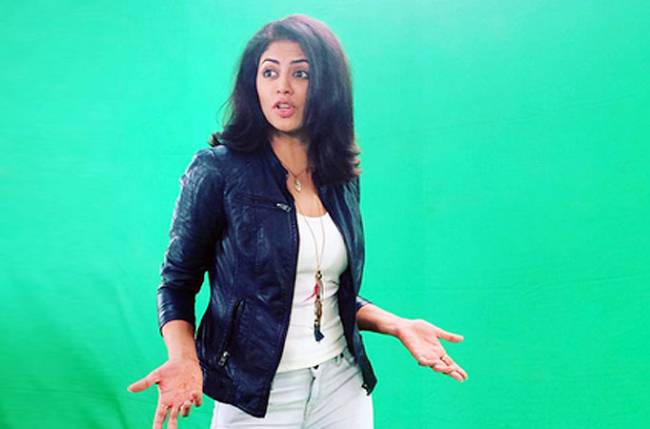 Kavita Kaushik, the lady with good looks, charm, humour and talent was left upset during the shoot of Jhalakfinale.

The actress was present for the finale shoot, that happened yesterday. As per a promotional integration, theComedy Nights Bachao team joined in to add laughter tadka.

According to our sources, the Bachao team was indulging in their usual ‘roast’ style insults and happened to pass some comments on the FIR fame actress too.

Kavita, who is known for her sporting nature took the mike to give them back. But, when she was about to speak, the mike was switched off from the crew. This made Kavita felt humiliated, and she walked off from the stage fuming in anger.

To get more clarity, we buzzed Kavita, who opened up about the entire incident and shared via text, “Yes it’s true, I am totally against shows like the roast where national personalities are insulted with cheap comments, people do it but I don’t have any such majboori nor am I comfortable projecting myself in a shallow manner to create content or money. I had signed Jhalak and not “Bachaao”, without my permission or a brief some random people threw a volley of insults at me and when I tried to retaliate they cut power off my Mike. The country law also doesn’t allow curbing someone’s freedom of speech especially while protecting one’s dignity. I did not go to a vulgar space and it’s demeaning that my space is encroached upon in a dance based show that I was only clapping and attending to support the finalists and cheer for the winner. Once they cut my Mike off I was sitting helplessly while the so called comedians had a field day cracking insensitive and undignified lines on me and I had to eventually get up and leave as I felt humiliated and could not take it anymore. It’s very very sad that this was done to someone like me who has never crossed a line or insulted anyone in my 9 years of doing comedy even as playing a cop I have not insulted a woman’s dignity on my show ever. I will henceforth protect myself and never do a reality show ever this was a lesson learnt. How can someone do something to you on national TV without your consent? It’s not only unprofessional it’s undignified and inhuman. Every actor does not come with a price tag on his integrity and soul.(sic)”

Another show is all set to follow the LEAP brigade; ropes in NEW actors!

Characters on TV are all inspired from real life: Shalini Arora