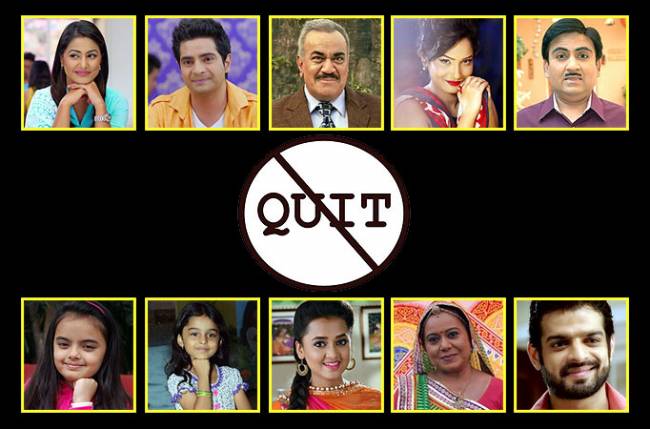 The glamour world is a labyrinth of fake talks and silly rumours. In fact, many TV stars have made headlines for fake quitting tales. Even though they turned out to be rumours, they still shook us up. Here is a list of those celebs…take a look:

Yeh Rishta is entertaining TV audiences for the past seven years. And in those seven years, the lead of show Hina Khan was mostly in the news for ‘quitting’ the show. But the talented actress is still shining on the show.

Recently, Karan was in the limelight for parting ways from Yeh Rishta, but in an exclusive chat withTellychakkar, Karan revealed it to be a fake news.

CID’s loyal viewers were shocked when a little birdie came out with Shivaji Satam’s quitting news. Apparently, creative differences with producer BP Singh (Fireworks) has been resolved and Shivaji is still ruling our hearts as ACP Pradyuman.

Though the gorgeous actress has been missing since Pavitra Rishta wrapped up, she was mostly on our radar for calling the daily soap quits. But all that turned to be false talk as she stuck around till the end.

The young girl was thought to be walking away from Yeh Hai Mohabbatein, but we are happy to tell you that Ruhi is still entertaining masses in the show.

Spandan aka Chakor was supposed to leave the show due to some unknown problems, but all that seems to be in the past now.

Tejasvi was not happy playing a negative role in Swaragini, so she put down her papers. Luckily for her and us, the makers have now decided to change her role from negative to positive to sustain her in the show.

Neela Vaghela’s quitting news came as a shocker, but later it was said to be a PR gimmick to boost the TRP of the show.

There was a strong buzz about Deven Bhojani replacing Dilip Joshi in Taarak Mehta. But of course, that was just gossip mongers having a field day.

The angry young man of TV, Karan too was sucked into the fake quitting game. Thankfully, he is still very much a part of Yeh Hai Mohabatein.

TV star Divya Agarwal expresses the importance of working, laughing and positivity amid hours of distress and pens a powerful post for ailing father by sharing her family picture on social media

Look who surprised Kritika Kamra on her birthday!