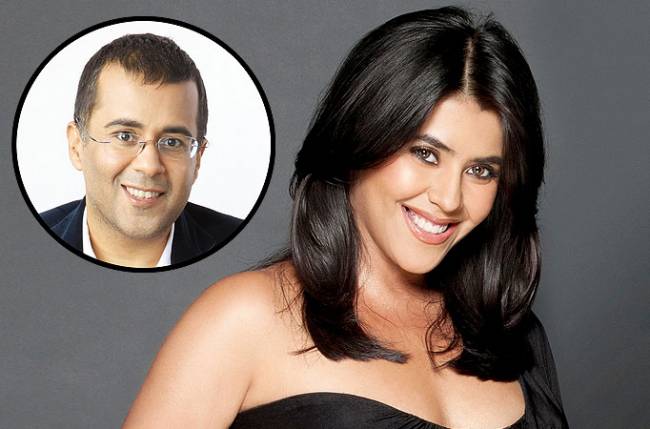 After captivating audiences of the small screen with engrossing tales in the fiction genre, Ekta Kapoor has ventured into non-fiction format with reality show “Nach Baliye 7”. The TV tsarina says the ongoing season will unfold many facets of a relationship and terms judge and author Chetan Bhagat as the ‘X-Factor’ of the show.

Bhagat has taken up the role of a judge for the seventh season of the Star Plus show, which Ekta is producing. He is accompanied by actress Preity Zinta and choreographer Marzi Pestonji on the judges panel.

“Dance is just one part of expression and with the new format, we are trying to explore layers of each relationship so that we will see a lot more storytelling in the dance defined by the couples journey in the week.

“Since this year is all about too much, we thought why not go ahead with another twist and bring in someone that people would not normally expect. Chetan is the X-Factor of the show and his role on the show will be that of a motivator and story teller, he will focus on finding the real perfect couple on ‘Nach Baliye’,” she said in a statement.

Credited for shows like “Kyunki Saas Bhi Kabhi Bahu Thi”, “Pavitra Rishta” and “Bade Achhe Lagte Hain”, Ekta says with the dance reality show she is “exploring 11 different stories of these jodis (couples) and that is my reason for doing this show”.

A lot of twists and turns are planned for the seventh season of the show which will take audiences into the world of celebrity couples.

“Viewers today want to see more than just glamour and glitz – they want to see the celebrities with masks off. The fresh judging panel will bring varied perspectives to each relationship and entertainment to the show – Preity, Marzi and Chetan,” Ekta said.

Ekta also pointed out that “the main idea is test each jodi on how well they know and understand each other. They will be judged on key aspects that make any relationship work, so will be taking them through a challenge based on trust, another one based on team work, one on compatibility and so on”.

One of the changes is scrapping the audience voting system. And Ekta says the decision to evict couples will be based on the love meter and dance skills.

“Every week, basis the love challenge, the jodi that scores the maximum points gets love power, which makes them safe from saying goodbye to the show. They have the power to choose another jodi to be safe with them.

“And obviously, keeping in mind that the show is primarily a dance show, the jodi with top points also gets the love power and safe that week. However, basis the dance performance and the judges points, jodis will either be safe or face Nach ka The End,” she said.

There were reports that Ekta may appear on the show as a ‘maha judge’. Without refuting the reports, Ekta says the audience should gear up for the unexpected this season.

“‘Nach Baliye’ is going to be too much. There are surprises on every turn, so never know what comes next,” she said.

Checkout what Hina Khan is up to these days, Drashti Dhami slays like a diva, Sehban Azim turns a hairstylist and other Telly updates