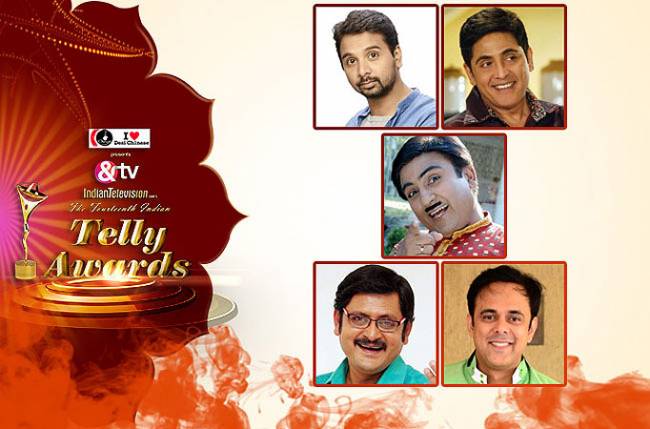 We at Tellychakkar.com wrote about how the actresses excel in comic roles, and bring a smile on the audience’s faces. The same holds good for actors, who give their cent percent to perform at their comic best.

Here’s the list of nominations for the category of the Best Actor in a Comic Role at the 14th Indian Telly Awards (in alphabetical order).

Aashif Sheikh, the veteran actor has made it big on the small screen as the very popular Vibhuti Narayan of Bhabhi Ji Ghar Pe Hain. His sense of humour and smiling face can flatter many ladies. The man has gained a tremendous fan following, for playing the character who wishes to add extra spice into his life by sneaking into his neighbour’s wife’s life.

Dilip Joshi, as the crafty businessman Jethalal in Taarak Mehta Ka Ooltah Chashmah is the perfect husband, son and father. His histrionics on the show take the viewers to an all new high, so much so that he has been adored by one and all for many years.

Namit Das as the Desi Raymond had his task cut out when he accepted this challenging offer. Nevertheless, Namit has done justice to the character, thus impressing masses. His likeable presence, elegant nature makes his character all the more relatable.

Rohitashv Gour, as the male chauvinist Manmohan Tiwary has been an excellent performer. His secret admiration for the neighbour’s wife Anita has always provided for exciting scenes. Tiwary’s fan following is humungous and kudos to Rohitashv for playing the character to the ‘T’.

Sumeet Raghavan as the cute and adorable Vasant Ghotala of Badi Dooooor Se Aaye Hain can be touted as a best ‘alien’ on screen. His comic timing and amazing screen presence has always drawn crowds, and as Vasant too, he has been successful in entertaining masses to the core.

Now get ready and vote for your favorite Actor in a Comic Role. Here is the link to follow…

Gurmeet Choudhary gets emotional; bonds with a local Punjabi family

Divyanka Tripathi calls ‘THEM’ her Gurus